How installing solar panels can cut your electricity bill in Spain

April 26th, 2022
Kevin Jones
IN Construction
No Comments
TwitterFacebookWhatsAppGoogle+BufferLinkedInPin It

With electricity prices climbing upwards, we’re all looking for ways to reduce our bills. There’s only so much we can do in the way of unplugging appliances when we’re not using them rather than leave them on standby. And making sure we put a full load in the washing machine each time.

With 320 days of sunshine every year on the Costa Blanca, it makes sense to convert the sun’s energy into electricity, especially when studies show that installing solar panels on your home in Spain can cut your monthly electricity bill by around 25-30%.

Solar energy is totally renewable- we’re never going to run out of sunshine – clean and environmentally friendly. Solar energy does not produce any CO2 emissions. It is silent, unlike wind turbines, for example. It’s accessible anywhere, even in remote locations, and is easy to install.

What is solar energy?

“The amount of sunlight that strikes the earth’s surface in an hour and a half is enough to handle the entire world’s energy consumption for a full year,” according to the US Office of Energy Efficiency and Renewable Energy.

Solar power can be generated through huge photovoltaic plants or through PV or solar panels on your own home. The largest PV plant in Spain is the  Núñez de Balboa photovoltaic plant in Badajoz which can supply green energy to 250,000 people. 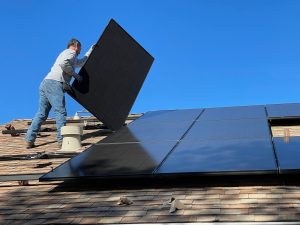 How do photovoltaic panels and solar panels work?

Solar technology converts that sunshine into electrical energy through photovoltaic panels. This energy is used to generate electricity or can be stored either in batteries or thermal storage to be used later.

The photovoltaic system transforms solar radiation directly into electrical energy. The solar panels contain PV cells which absorb energy from the sunlight. This energy is then converted by the PV cells into electricity.

Solar thermal energy uses thermal solar panels – or collectors – which transform solar radiation into heat. These can be used to heat water for residential or industrial use and the energy can also be used to produce electricity.

The most widespread use of solar energy is through the installation of photovoltaic panels, according to Repsol.

Photovoltaics can be used to power anything from homes and commercial businesses to small electronics such as road signs or calculators.

Contact us for more information about installing solar energy in your home in Spain.